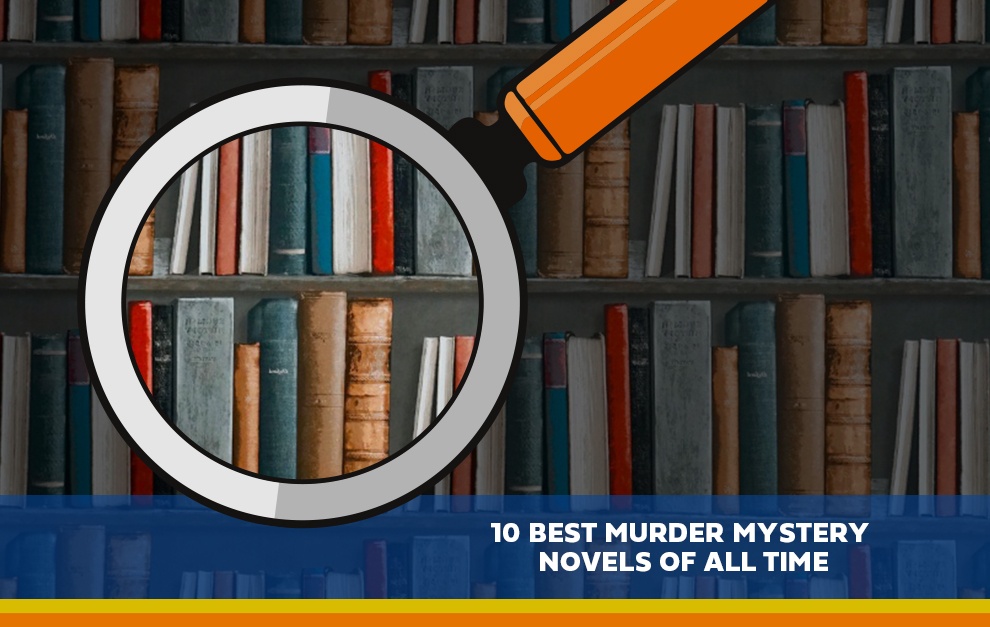 When you flip open a murder mystery novel, what do you expect? Likely a thrilling tale that keeps you guessing who the culprit was.

The best mysteries are those with ingenious clues along the way that brings out the detective in you. Arguably, the greatest feeling when reading a murder mystery is being faced with a sufficiently puzzling case–while still being able to jump up and shout “I knew it!” when the truth is revealed.

Starting our list off is Strong Poison. In this novel, Harriet Vane is accused of murdering her lover via arsenic. Despite the damning evidence, Lord Peter Wimsey believes she is innocent and makes it his mission to prove her innocence and ultimately save her life.

We believe this to be one of Sayers’ fastest-paced mysteries. Harriet Vane is introduced as a strong female character who might actually be modeled after Sayers herself. Vane shows egalitarian interest while Detective Parker gets engaged to Lady Mary, Wimsey’s younger sister, with full support. All these well-written characters are wrapped up in a great story that keeps the reader engaged the whole time.

9. In Cold Blood
by Truman Capote

This book is a true masterpiece of a (mostly) non-fiction novel. Its narration is strong in character development and is able to maintain an enormous amount of suspense between each reveal. This is astounding because the reader knows who commits the crime from the beginning, the novel only explores the "why."

8. The Yard
by Alec Grecian

Only a year after Jack the Ripper claimed his last victim, Victorian London is trapped in a wave of crime and murder–with its citizens no longer trusting the police to protect them. The newly founded Murder Squad of Scotland Yard, which includes just twelve detectives, battles against the tide of cruelty and violence. When the body of a Yard detective is discovered in a suitcase, his eyes and mouth sewn shut, it becomes clear that no one is safe from attack. Has the Ripper resurfaced, or is a new killer at large?

Grecian successfully puts you in the atmosphere, the streets of London paved with gaslights and Hansom cabs, the bleak workhouses, the great Scotland yard–and their morgue in the early days of forensic pathology, when DNA detection was virtually unheard of.

Mr. Mercedes, an emotionally disturbed psychopath who lost his father at the age of eight. He is now in his late twenties, but as a young boy, he murdered his mentally handicapped brother with his mother's encouragement.

The novel's opening epitomizes Stephen King's mastery of character. In just a few short pages, King captures the detailed struggles of two people who are trying to survive in an unstable economy. Then, things take a turn for the worst for these two people, and we realize that anything, and everything, can happen in this shocking and brilliant thriller.

6. Death on the Nile
by Agatha Christie

Death on the Nile follows Hercule Poirot when he embarks on a vacation to Egypt, but finds himself solving two murder cases instead of sightseeing.

This is an undoubtedly good murder-mystery story with a complex plot. Poirot's analytical mind comprehends the mystery without complete proof and apprehends the criminals who otherwise would have escaped punishment. Poirot's verdict is his own and always shows his consideration for human feelings.

5. The Alienist
by Caleb Carr

The Alienist, by Caleb Carr, is a complex psychological thriller set in 1896. It follows an alienist, Dr. Lazlow Kreizler, and four other members of a team he assembled to try and psychologically profile a mystery killer who is mutilating and murdering male child prostitutes in New York City.

What's especially impressive about this novel is the seamless merging of pure fiction with historical fact. The setting, 1896 New York, is almost a living, breathing character of its own–with loads o references to known landmarks. The characters are well-drawn out and the plot moves along well. We recommend this book to all who love a good crime story but also appreciate history.

The Da Vinci Code trails "symbologist" Robert Langdon and cryptologist Sophie Neveu after they become involved in a battle between the Priory of Sion and Opus Dei over the possibility of Jesus Christ and Mary Magdalene having had a child together. All of which is tied to a murder in the Louvre Museum in Paris.

This novel is a mind-blowing thriller. It will keep your toes from the first letter to the last. The descriptions of the history and symbols are incredible and the mode of narration is stunning.

This is a collection of twelve short stories by Arthur Conan Doyle, first published in October of 1892. It contains the earliest short stories of the detective Sherlock Holmes, which were originally published in twelve monthly issues of The Strand Magazine from July 1891 to June 1892. The only characters in all twelve are Dr. Watson and Sherlock Holmes. All are related in the first-person narrative from Watson's point of view.

Holmes is easily one of the most well-developed literary characters of all time. In nearly every story, something new about his background is revealed, but never too much, leaving him mysterious. The stories take the reader through Holmes' incredible methods of deduction, and the explanations often leave the reader amazed.

2. Murder on the Orient Express
by Agatha Christie

Just after midnight, a snowdrift halts the Orient Express in its tracks. The well-known, luxurious train is surprisingly full for winter time, but come morning it has one less living passenger. An American tycoon is found dead in his compartment, stabbed a dozen times, with his door locked from the inside. Left isolated and with a killer in their midst, detective Hercule Poirot must uncover the truth– before the murderer decides to strike again.

This is such an interesting and mysterious novel. The way Poirot was able to piece it together was brilliant. Your heart will be pounding as you wait to discover who the culprit was. It's truly unexpected. How the middle of the book merges into the last bits of the story is mesmerizing.

1. And Then There Were None
by Agatha Christie

Coming in at number one, this novel is widely considered the best mystery novel ever written by many readers. The story follows ten strangers, each lured to Indian Island by a mysterious host. Once the guests have arrived, the host accuses each of them of murder. Trapped on the island, the guests open up and share their darkest secrets—until they begin to die.

A true masterpiece. This book will give you chills unlike any you've experienced from modern-day suspense novels. Any true lover of murder mysteries should go back to the roots of the genre and read this book.

If reading mysteries is exciting to you, then watching one play out right in front of you will be exhilarating. Enjoy a delicious five-course meal while a live murder mystery show unravels before you. Put your sleuthing skills to the test during the forty-mile round trip from Colonial Station in Fort Myers, Florida.