All Aboard! The 5 Most Unique Train Experiences in the U.S. 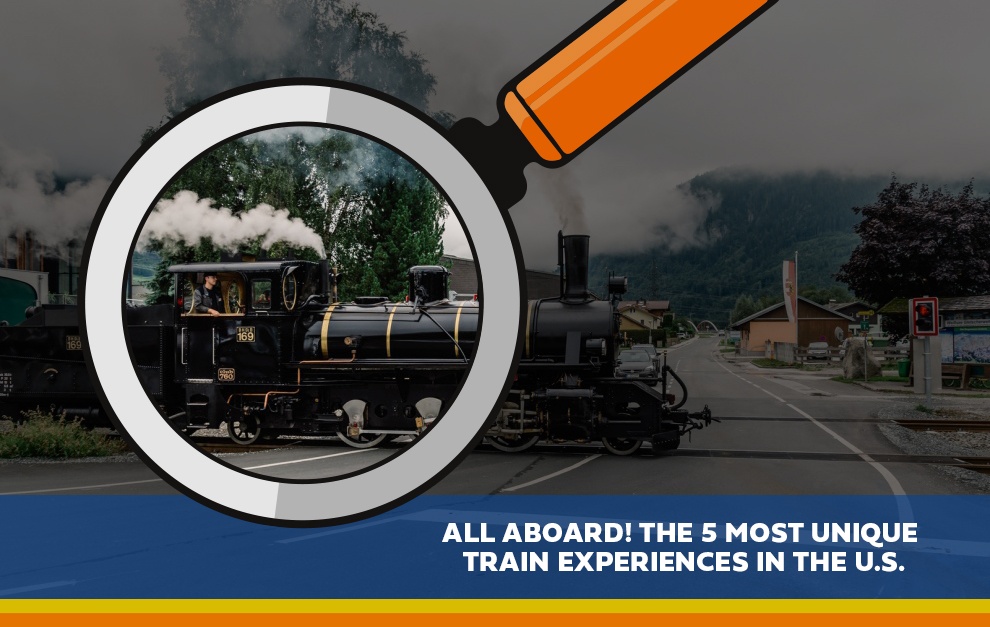 Looking for destinations that will capture the whole family's attention? Kids are often intrigued by anything to do with trains and railroads, and adults will find themselves channeling their inner child when presented with an opportunity to travel back in time with their young ones.

If you're looking to plan a unique train-themed adventure, consider any of these five train experiences!

The National Railroad Museum in Green Bay, WI is one of the oldest and largest railroad museums in the country. Founded in 1956, the exciting exhibits of today include locomotives and railcars that cover more than a century's worth of history. It's also home to the world's largest steam locomotive, the Union Pacific Big Boy!

This is the perfect stop for the whole family, with tons of history to absorb for the adults, and the Children’s Discovery Depot for the kids—which includes a train kids can ride around the museum. If you have time to spend at the National Railroad Museum, consider climbing to the top of the observatory tower to watch the twenty-five-minute documentary, "Last of the Giants."

The Santa Fe Railroad and the Fred Harvey Company provided most of the historic structures that can still be found along the South Rim. In 1988, the line was purchased by a couple from Phoenix, AZ, Max and Thelma Biegert. The couple restored the railway in 1989, with the first restored run taking place on September 17th, 1989, as a tribute to the original September 17th debut in 1901.

Today, the railroad carries hundreds of passengers to and from the Canyon every day. Some notable passengers throughout the years include:

Your family can join the ranks!

As the original Union Station of Omaha, the Durham Museum houses the restored art-deco craftsmanship of the train depot set on a double track main line. These trains once carried passengers between Omaha and Ogden.

The building's lower level is home to permanent exhibits that take passengers through the train cars of the 1940s and '50s and to a push-button interactive O scale model train. The museum also includes exhibits on history, culture, science, and industry. To enjoy the full museum, you'll need at least an hour, and you don't want to miss out on the historic fun that is downtown Omaha, either.

The California State Railroad Museum is consistently ranked as one of the best railroad museums in the country. The museum houses 21 carefully restored "iron horse" locomotives, plus many open for one-of-a-kind walk-throughs—with incredible attention to detail depending on the time period of the locomotive.

During the spring and summer months (April-September), the museum offers a special excursion ride every hour on the Sacramento Southern Railroad. Take in the views along the Sacramento River and through Old Sacramento from a first-class observation car, a closed coach, or an open-air gondola!

For the most unique train experience on the list, we bring you the Murder Mystery Dinner Train. Enjoy a five-course dinner with a choice from three entrees, prepared fresh onboard the train while a live murder mystery show is played out in the dining cars. The ride is a forty-mile round trip over 3 and half hours from Colonial Station in Fort Myers, Florida.

For a one-of-a-kind railroad experience, book your evening on the Murder Mystery Dinner Train! Schedule through the website or by calling 239-275-8487. All aboard!