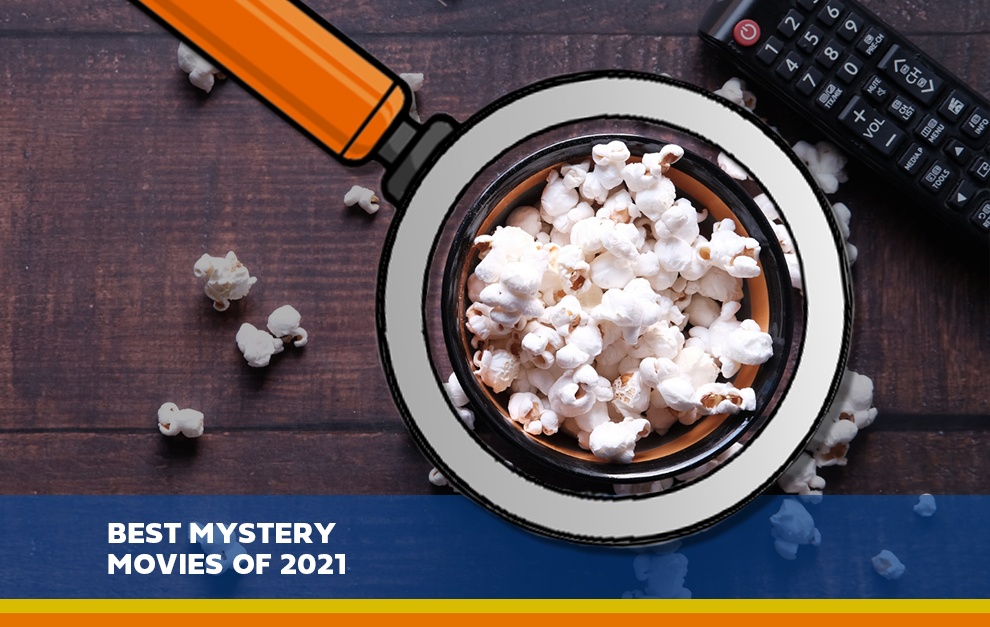 2021 was a bit of a whirlwind–you may have some catching up to do with movies released in the last year.

Now that we are officially a full month into 2022, let's recap some of our favorite mystery movies to be released in 2021.

After he is sentenced to death by electrocution, serial killer Ted Bundy forms a complicated and strange relationship with Bill Hagmaier, an FBI agent. Their relationship develops over the detailing of Bundy's heinous crimes.

While the life of Ted Bundy is heavily covered, this film found a way to give a new and enticing perspective. It's hardly about Bundy himself, his charismatic crimes, or even the trial process. The focus is solely on this strange relationship he had with Bill Hagmaier.

5. The Woman in the Window

Agoraphobic, child psychologist, Dr. Anna Fox is witness to something she shouldn't have been while keeping a close watch on the Russel family–her neighbors across the way whose lives seem picture-perfect.

Not to be confused with the new Netflix hit series, The Woman Across the Street from the Girl in the Window–although the show is certainly referencing the film.

When an aspiring fashion designer is mysteriously able to travel to the 1960s, where she meets a dazzling wannabe singer, she feels all her dreams may come true. However, the glamour turns out to be not all she thought, and the dreams of the past begin to splinter and crack into a dark reality.

A new addition to the infamous Saw series. Following in his father's footsteps and working in his shadow, Detective Ezekiel 'Zeke" Banks and his newbie partner are put in charge of an investigation of disturbing murders that are eerily reminiscent of the city's gruesome past. Entrapped in a deepening mystery, Zeke finds himself a pawn at the center of the killer's morbid game.

A private investigator of the mind, Nick Bannister, spends his life navigating the darkly alluring world of the past by assisting his clients in accessing lost memories. While living on the fringes of the sunken Miami coast, he finds his life forever changed as he unfolds a violent conspiracy in the midst of trying to solve the mystery behind a client who disappeared.

A special crimes investigator finds unlikely common ground with a serial killer targeting the perpetrators of a massive and powerful child-trafficking ring.

I am All Girls gets the number one spot because it's one of the best attempts at narrating the complexities of child trafficking. While it's certainly an emotionally draining film, it's also intelligently woven, covering many other complex issues, has great cinematography, and a brilliant cast.

Want to Solve a Mystery in Real-Time?

Book a ride on the Murder Mystery Dinner Train. We are showing A Killer Act–a tale of betrayal amongst two dueling duets–now through February 27th.

Enjoy a delicious five-course meal, bring the family, and put your heads together to solve a live mystery during the forty-mile round trip from Colonial Station in Fort Myers, Florida.

Give us a call today to book your seat! The mystery waits for no one.