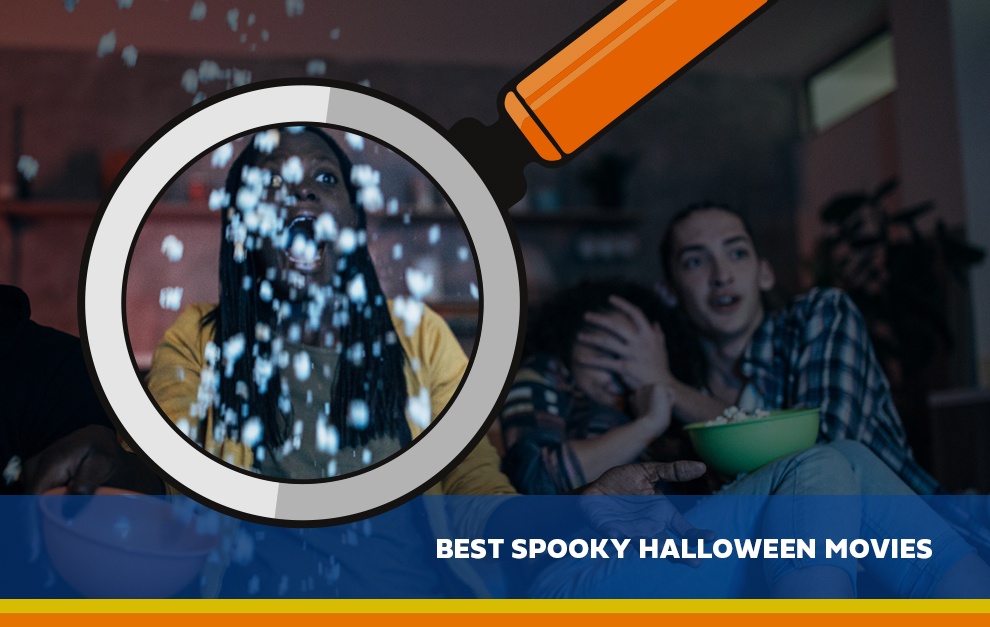 Spooky season makes for the perfect time to cozy up in your home in front of your TV. If you're in the mood for a movie that will send a chill down your spine, you're in the right place. Fortunately, there is no shortage of amazing scary films to keep any film buff happy.

There are films for the hypochondriacs, conspiracy theorists, doomsday preppers, and superstitious ghost hunters among us. Let these movies transport you to a nightmarish alternate reality where you can live out your deepest fears in the comfort of your own home. So settle in and get ready to be scared out of your mind.

Here are some of the best spooky Halloween movies to watch this October:

The horror movie, Ready Or Not, features a newlywed who must outlast a deadly game of hide-and-seek from her new in-laws. If the plot wasn't stressful enough, the in-laws hunt their prey with an arsenal of weapons. Grace, the bride, has to do everything she can to enjoy her new life, and, you know, survive.

This standalone film may be considered an oddity. Although he's best known for his essential additions to the horror genre with movies such as Saw, Insidious, and The Conjuring, this feature truly unleashed Wan's storytelling talents. With visual effects that will give you nightmares, this wild story follows you through breathtaking revelations—with unexpected twists and turns along the way.

The first movie in the Insidious franchise is by far the best. It tells the story of a family who moves into a new home, only to find that their son has become possessed by a malevolent spirit. The family must consult with two ghost hunters to save their son before it's too late.

This film is not for the faint of heart. It tells the story of a family in 1630s New England who are exiled from their Puritan community and forced to start anew on the edge of a forest. While struggling to survive, they must also deal with an evil presence lurking in the woods.

The most frightening films don't necessarily need to go beyond the realm of the supernatural or colossal in order to terrify. This classic film from 1972 is set in the backwoods of Georgia. It follows four city slickers who go on a canoe trip, only to be terrorized by two redneck hillbillies. The film is full of suspense and features one of the most iconic scenes in cinema history.

This is one of the most recent additions to the horror genre, but it has already made a significant impact. Toni Collette stars as a mother struggling to come to terms with the death of her estranged mother. As she and her family grieve, they start to experience some truly horrifying events.

This film is set in a post-apocalyptic world where creatures that hunt by sound have decimated most of humanity. A family of four must live in complete silence, or risk being hunted and killed. The movie is intense, suspenseful, and will leave you on the edge of your seat.

The Conjuring is based on the true story of Ed and Lorraine Warren, two paranormal investigators who helped a family deal with a demonic presence in their home. The film is scary, but it's also fascinating to see the Warrens' methodical approach to dealing with ghosts and demons.

The Babadook is a psychological horror film about a mother who is struggling to deal with the death of her husband. Her young son starts to see a monster in their home, and the mother must face her own demons in order to protect her son.

This film follows a group of friends who go on a caving expedition, only to get trapped underground with a race of cannibalistic humanoid creatures. The movie is full of suspense and will leave you feeling claustrophobic.

The Exorcist is a classic horror film about a possessed girl and the two priests who attempt to save her. The movie is still as scary today as it was when it was released in 1973.

The Shining is one of the most well-known horror movies of all time. It tells the story of a family who moves into a remote hotel, only to find that the father is slowly going insane. The movie is full of suspense and features some truly terrifying scenes.

We can't talk about scary Halloween movies without talking about Halloween itself. The original Halloween is a classic film that spawned an entire franchise. It tells the story of a deranged killer who escapes from a mental institution and returns to his hometown to kill again. The movie is full of suspense and is sure to leave you feeling scared.

If you're looking for a Halloween experience that's fun for the whole family, look no further than the Murder Mystery Dinner Train. Our delicious food and drinks are prepared fresh every day by our chefs and served to you by our friendly staff. As you enjoy your meal, you'll be treated to a murder mystery performance by our talented cast. The first sleuths to solve the case will win a prize! Book your seats now.

Our Dinner Train is still under repairs following the hurricane, but we are hoping to be back up very soon. Check our site for up-to-date information!