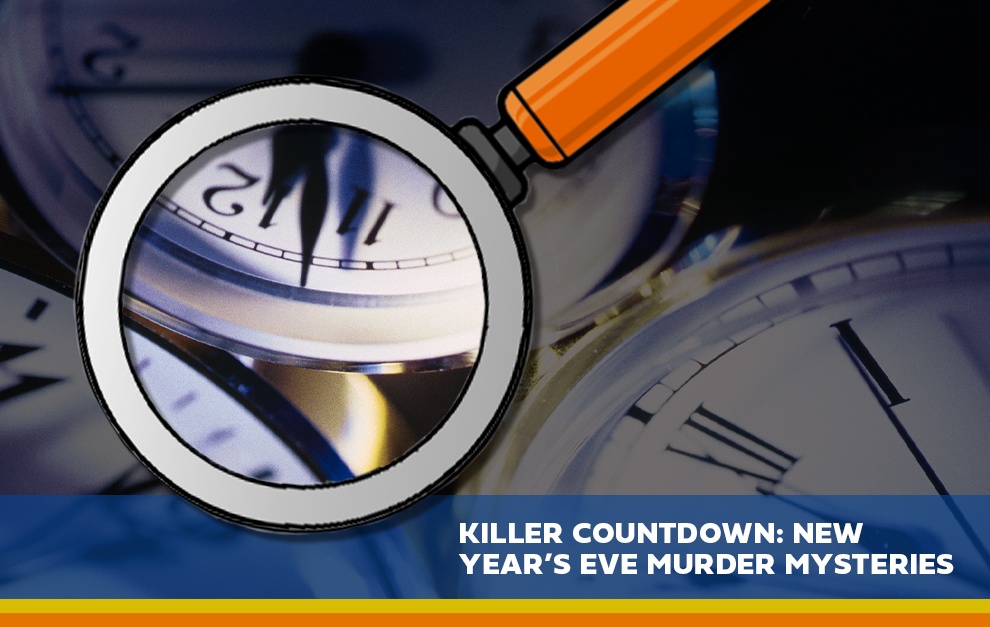 The new year can be a time for high hopes, merriment, goals, and new beginnings! But ringing in the new year can take on a much darker meaning when it comes to these mystery novels–all of which take place right before the ball drops. While most others are tipping back champagne, crooks are cooking up a merry dose of murder and mayhem.

Looking to end your year with a bang? Check out these exciting New Year's Eve mysteries that are filled with twists and turns.

After John Halley turns up dead following a raucous New Year's Eve party, his wife Margaret is convinced he threw himself into the lake in a fit of depression. The New York State Police Captain, M.L. Heimrich, isn't so sure. There were easier ways of ending his life at John's disposal–the bottle of pills sitting at his bedside, for example–rather than trudging through the snow to launch himself into a freezing body of water. The captain suspects foul play–but who could be responsible for this nefarious act?

Frannie Jay–formerly known as Frances Jakumbowski–returns to her hometown of New Haven, Connecticut, after spending 20 years in California. Frannie's hometown is a university town known for being rife with crime. The depressed aerobics instructor has returned home with the hopes of starting a new life at the Fountain of Youth–a local workout studio whose weight trainer, Tim Bradbury, is well-known as the best in the business. Unfortunately, Frannie's fresh start goes wrong just before New Year's when she discovers Bradbury's naked, dead body in the bushes outside the studio.

Despite the fact that they share a manor house, the Paradines are not close, and their patriarch does anything but discourage the petty jealousies that often divide wealthy families. James Paradine, a cold figure, prefers to work his relations, but on New Year's Eve, he makes an exception and gathers everyone in the household. He has discovered that valuable plans have been stolen from his office–he believes only one person could be to blame. He gives the culprit until midnight to come forward. But by the time the clock strikes, James Paradine is dead. With the local authorities perplexed, it's up to an amateur detective, Miss Maud Silver, to discover and expose the murderer.

Many years ago, Bernie and Libby Simson's parents became estranged from the Sinclair side of the family. With the reason for the divide long forgotten, the sisters find themselves intrigued when a distant relative reaches out with an opportunity for their catering business as well as a mystery. Ada Sinclair explains how both her father and his business partner mysteriously died within hours of each other. Both deaths were ruled accidents, but Ada has had suspicions for quite some time and has conducted a plan to expose the killer.

She plans to host a party on New Year's Eve where she will read aloud from an old diary she believes will expose the murderer. As the event begins to unfold and the Simmons sisters provide libations, Ava prepares. Just as she is about to give the big reveal, a guest drops dead and Ava is arrested for the murder. Now it's on Bernie and Libby to track down the real culprit.

A Toast to Murder

The Mack's Bar Mystery series by Allyson K. Abbot follows the adventures of bar owner and sleuthing hobbyist Mackenzie "Mack" Dalton as she solves cases and keeps the drinks flowing. In this New Year's Eve installment, Mack is on the hunt for a mysterious foe who murdered her bouncer and continues to taunt her. She has a suspect in mind and plots to put an end to his game at an exclusive New Year's party. To her surprise, the suspect turns up dead on the basement stars just as the clock strikes twelve.

It's clear that the new suspect is somewhere in the bar and it's up to Mack to discover their identity before the night ends–or it may be a very violent new year.

See a Murder Mystery Unfold Before You!

Experience the Murder Mystery Dinner Train and solve a live mystery. Enjoy a delectable five-course meal and put your crime-solving skills to the test during the forty-mile round trip from Colonial Station in Fort Myers, Florida.