Mystery and Crime Books Made into Films/TV Shows in 2022 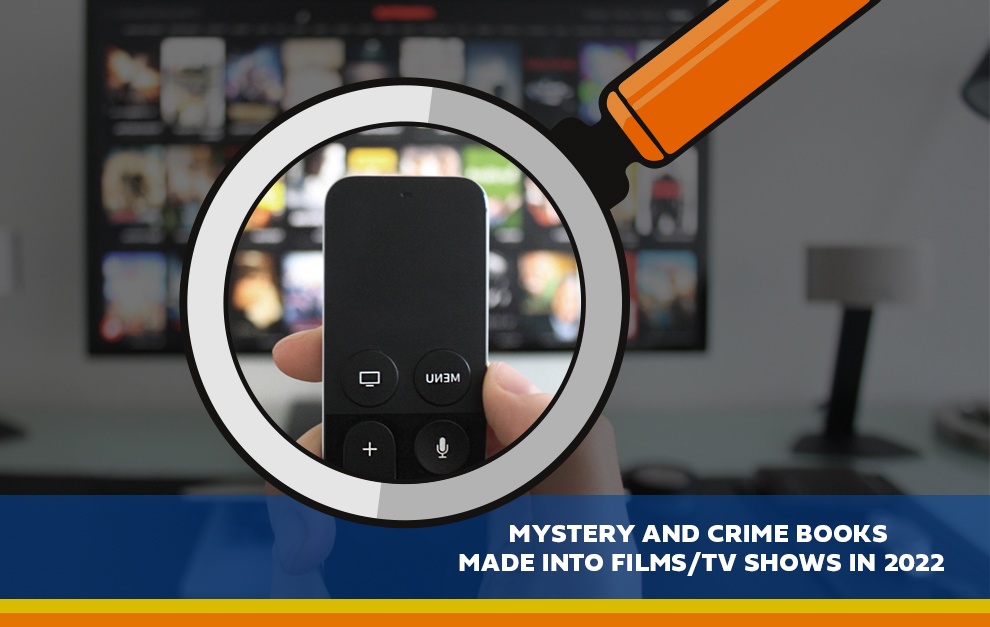 As the world continues to be gripped by crime and mystery, it's no surprise that Hollywood is turning to these genres for inspiration. Here are some of the most anticipated books-to-film or books-to-series adaptations coming out or already released in 2022.

1. Where the Crawdads Sing

If you haven't read Where the Crawdads Sing by Delia Owens yet, drop everything and read it immediately. This Southern murder mystery is one of the most captivating and stunning books in any genre and certainly stands out in the murder mystery genre.

While there are certainly times when you don't need to or won't want to read a book before watching the movie adaptation, this is not one of those times. The story follows a girl named Kya Clark living in the swamps outside of the small town of Barkley Cove in North Caroline in the '60s. One-by-one, her family leaves her and she ends up living in the swamp alone–she then becomes an incredibly talented naturalist without any human companions. Eventually, Kya experiences both love and heartbreak–this is before finding herself the main suspect in a murder investigation. This is the type of story you'll want to discuss with everyone you know and that will stick with you long after you finish it.

But Netflix is not the first to tell Delvey's story.

Rachel Deloache Williams, played by Katie Lowes in the show, documented her own encounters with Delvey in an essay for Vanity Fair in 2018, where she worked as a photo editor at the time. She later went into much greater detail on her experiences in a book, entitled My Friend Anna, published in 2019.

While Inventing Anna does depict a lot of Williams's story, the series is not told entirely from her point of view, nor does she agree with the way she is portrayed.

Instead, the story is told through Vivian Kent, the fictional stand-in for real-life Jessica Pressler, another journalist who wrote the New York Magazine exposé on which the series is based.

This book and series are both full of twists and turns and worth your time.

Deep Water, directed by Adrian Lyne, is an adaptation of Patricia Highsmith's 1957 novel of the same name. The film stars Ben Affleck as Vic, a man who murders his wife's (Ana de Armas) boyfriends out of jealousy. The screenplay, by Zach Helm and Sam Levinson, is faithful to the original book in many ways. For example, both book and movie start with the same opening line: "At present he was imagining that she would turn up dead." This sense of dark humor is also evident in the murder scenes, which are often funny as well as horrifying.

Deeper into the plot, we see that Vic's fascination with snails is inspired by his own murderous habits. In one scene, he even feeds a snail to one of his victim's body parts. This is just one of the many ways in which the film explores the dark side of human nature.

If you're a fan of psychological thrillers, Deep Water is definitely a film you should check out. It's well-written, well-acted, and sure to keep you on the edge of your seat.

4. Death on the Nile

Death on the Nile is a mystery thriller based on Agatha Christie's 1937 novel, directed by Kenneth Branagh. The story follows the idyllic honeymoon of an English couple that is shattered by the deaths of other passengers aboard a glamorous river steamer.

Hercule Poirot’s investigation into the murders becomes more and more sinister, with plenty of twists and turns to keep audiences guessing until the final, shocking denouement.

Killing Floor, the first book in the Jack Reacher series, is being adapted into a TV show on Amazon Prime Video. The series will star Alan Ritchson as Jack Reacher, a retired military police officer who is falsely accused of murder. As he struggles to prove his innocence, a deeper conspiracy emerges.

This thriller is full of twists and turns as readers–and soon viewers, too–try to uncover the truth.

If you're a mystery or true crime fanatic, you'll love this one-of-a-kind chance to solve a murder mystery as it unfolds before you. While you test your detective skills, you'll enjoy a delicious five-course meal on the forty-mile round trip from Colonial Station in Fort Myers, Florida.